As a follow up to my message on Hope from Sunday I would like to share a story I just read.
One of my passages of scripture from Sunday was

A man of great faith & patience was Pastor Charles Simeon. Born in Reading, England in 1759 he was the son of a wealthy attorney and grew up in an unbelieving family. After Eton College he continued on at King’s college at Cambridge where he came to faith in our Lord Jesus Christ. Shortly after graduation in 1782 he was called to minister at Trinity Church in Cambridge. His congregation immediately caused problems as they felt he was unfairly chosen over an associate already in the church. Numerous problems were caused by the members to show their dislike of Charles. Rather than resigning or scolding, Charles resolved to let God’s word and prayer overcome their opposition. It only took 12 years.

Charles also suffered persecution at Cambridge University where he held a position. Students also insulted him on the streets being prejudiced by his congregation and for his biblical preaching. After 49 years, his friend asked him how he endured so much persecution and prejudice. His answer. “My dear brother, we must not mind a little suffering for Christ’s sake. When I am getting through a hedge, if my head and shoulders are safely through, I can bear the pricking of my legs. Let us rejoice in the remembrance that Jesus Christ suffered and triumphed over death. Let us follow Him patiently; we shall soon be partakers of His victory”

Charles ultimately preached in the same church for 54 years. His extraordinary devotion for Christ and the love of God’s people along with commitment and patient endurance is a model to be followed.

It was recently suggested that a display of photos be put together for display in Shirley Magri’s room at Sunridge. We have found one of the Peake’s, Eleanor & Elinor are going to go through the Keenagers albums and check them out for appropriate photos. If any of you have a portrait kind of photo and would like to give it to one of the ladies that would be helpful.

I would like to take this opportunity to thank Daphne Eze for taking care of our website which has been used to bring visitors to our services.

Daphne is organizing our sound system with new parts coming in September. Don Kitch, Allan Vandine, and John Neuendorf have agreed to run the system. 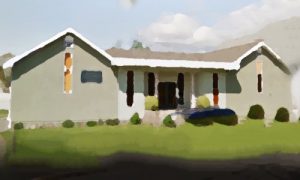 God’s blessings on you all.